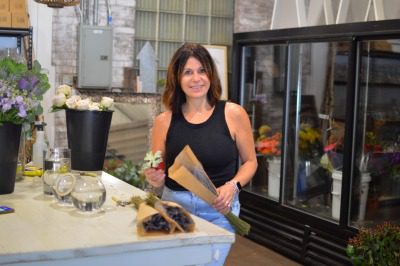 WEST SPRINGFIELD – If you grow up in New England, there’s a good chance if you’ve not attended the Eastern States Exposition, then at least you’ve heard about it and know what to expect from the third largest fair in the nation.

But what if you haven’t grown up here and have never been to a large multi-state fair? One of the new additions to the staff, Tyler Garnet, is in that situation and in this story, we will get his responses to the experience.

Spoiler: he liked it.

As has been the tradition of this newspaper, a group of news staffers descended on the fair on the first Monday of its run to see what was new, to see what was trending and to enjoy long-time favorites.

Starting our stroll through the Better Living Center, Tyler and I couldn’t help but notice a business that was new to the fair – Black Jungle Exotics from Greenfield. Co-owner Michael Wallitis sells carnivorous plans, such as Venus Fly Traps and Pitcher Plants.

Wallitis, who has been raising and selling the plants for 30 years, said some of the plants thrive outdoors, while others are houseplants. He added the plants were popular in the coronavirus pandemic as they can help in cleaning air in a home.

A sign on a box of Venus Fly Traps implored Big E visitors not to tease the plants.

They range in price from $9 to $25 and the company will hold your purchase as you complete your trip to the fair.

The Amherst Railroad Society, which stages what Show Manager John Sacerdote said is the largest model train show in North America annually at the Big E, was also in the Better Living Center. While they had T-shirts on sale to help raise funds for the nonprofit, Sacerdote said the booth was largely designed to promote the annual show coming on Jan. 28 and 29, 2023.

No trip to the Big E would be complete without an inexplicable artifact and that would be Cocktail Bombs on sale in the Better Living Center. The salesperson explained the bombs, which come in a variety of cocktail flavors, are dropped in a glass of seltzer and they fizzle away creating a non-alcoholic beverage. She added that actual alcohol can be added, if desired.

Trending in the Better Living Center were massage chairs with three vendors offering them. These chairs have a science fiction flair to them, looking like something from a NASA vehicle. They offer a near-full body massage: back, arms, neck, legs.

I had given Tyler explicit instructions to pull me away from any new gadget or tool as I’m fascinated – and prone to buy them – but this year I didn’t see any that truly temped me.

Over in the Young Building, the longtime feature of Irish imports returned after a year’s hiatus. For 20 years there has been a designated area featuring crafts and products from the Dingle area of Ireland and this year the area was filled with everything ranging from clothing to crystalware to liquor.

In the Massachusetts Building was something I had never before experienced: nitrogen ice cream. Marc McCabe of Sub-Zero demonstrated how the liquid ice cream mix was quickly transformed with the introduction of liquid nitrogen. There’s an element of theatricality in the process with a cloud of liquid nitrogen formed.

McCabe noted the resulting ice cream was denser and had far less air than conventional made ice cream.

And by the way the samples he had us try were delicious.

Tyler Garnet wrote, “My first ever trip to the Big E was remarkable. Growing up in Long Island, NY, we never had a close enough fair or even a fair that was cool enough that me and my friends would want to visit. From the minute I walked into the Big E I quickly realized why this was one of the top fairs in the country and is around for over two weeks every year. I was able to walk around for about two and a half hours and check out all the stands, food, rides, animals, and entertainment. All the vendors were super friendly, and I couldn’t believe how much of everything there was. Some of the memorable food I saw was smoked salmon on a stick, giant mozzarella sticks and deep-fried tacos. There were also plenty of unique alcohol stands around that looked worth tasting, and I plan to try some next time I go.

“One of my favorite parts of the Big E was walking through the state houses of each of the New England areas. Each building offered a look into what it would be like to live in that specific state based on the food and shops they are known for. All the food looked delicious, and I was able to try a steak sandwich from Butcher Boys that did not disappoint and some liquid nitrogen ice cream that was some of the best I have ever had. A few hours were not enough for me to fully explore or taste everything, so I plan to go at least a couple more times before the Big E is over.”

What the Big E means to local businesses

Local businesses at the Big E reported a successful first weekend as the fair broke the opening day attendance record. Southwick’s Moolicious Farm’s ice cream stand is celebrating the 10th anniversary of the introduction of “The Moonut,” a glazed donut filled with soft-serve ice cream topped with fudge and a choice of dry toppings.

“The idea for that more or less came from watching too much of ‘The Simpsons,’” said Joseph Deedy, owner of Moolicious.

Deedy first brought his ice cream to The Big E nearly 30 years ago and has opted to close the storefront in Southwick in favor of running the Big E stand in most years since. Beginning in 2021, Moolicious was able to set up a second stand at the fair. One stand is set up across the road from The Big E Slide, while the other is on the other side of the Better Living Center, and Deedy said each has slightly different offerings for people to explore.

On the other side of the Better Living Center is the Front Porch, a new setup at the fair this year where local businesses can highlight themselves and sell merchandise to Big E attendees. Within the Front Porch this year is Champagne Apothecary, a store from Westfield that sells self-care and skincare products among other items. Owner Amber Champagne-Matos developed her own line of skincare products that launched in May, and she said it has since sold out four times.

Her products include soaps, lotions, candles, coffee grounds and essential oils, among a large variety of merchandise.

It was Champagne-Matos’ first time at The Big E as a business owner, and she said the first weekend went well, and gave her more exposure from even Westfield residents to the point where she may sell out for a fifth time in under a year.

“We are selling a ton here, and we have a lot of people seeing us online and internet traffic is going wild,” said Champagne-Matos.

Sitting just outside Gate 9 of the Better Living Center is the Granville Country Store’s famous grilled cheese stand, which has been present at The Big E for 14 years. Owner John Mountain said that they started at The Big E by making steak-and-cheese sandwiches, but when they were asked to sell something more representative of their store, they went with a variety of grilled-cheese, of course using the famous cheese sold at their store in Granville.

“My wife came up with the idea of a variety of grilled cheeses instead and it has been a hit ever since,” said Mountain.

One could get a simple grilled cheese sandwich, but the Granville Country Store offers more creative options, as one does at The Big E. These include The Mac Melt, which is a grilled macaroni and cheese sandwich that can be topped with things like bacon, guacamole, and sundried tomatoes.

Also at the Front Porch is Blooms Flower Truck, a Westfield-based floral company that began solely as a mobile business. Owner Tina Dagostino said she was able to get a studio space in The Mill in Westfield last November. Her truck is parked at the Front Porch, and she will be working it Friday-Sunday for the duration of the fair.

Blooms is offering small plants, succulents and kits to grow them yourself, and she will be offering different flowers each weekend including sunflowers, bouquets, and flowers from local farms like Old Friends Farm in Amherst.

It was also Dagostino’s first time at The Big E as a business owner, and said she felt it was a resounding success during opening weekend due to the record-breaking turnout.

“I had no idea what to expect. It was wild in a good way,” said Dagostino. “People typically don’t see fresh flowers and plants in a unique delivery vehicle at The Big E.”

Your cart is currently empty!

SHIP IT - Select this option at checkout and our sellers will ship your purchases to arrive within the next 1-5 business days.

NOTE TO OUR CUSTOMERS - Each item in your cart can have a different processing time. Typically, 1-3 days, but can be up to 3 weeks or more. Please take note before checking out.

GIFTS - Please use the "Order notes" section when you get to the checkout page to let our stores know that it is a gift.

HOLIDAY RETURN POLICY - We have a 14 day return policy, but individual store policies take precedence over ours if they are shorter. We ask shoppers to read store holiday return policies carefully. Most seasonal items cannot be returned.